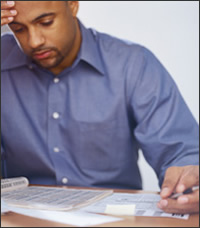 Many types of IRS Problems are confusing because you can't always get accurate information. Most taxpayers do not feel comfortable calling the IRS for answers. You can read through the IRS Problems listed below to help you obtain a better understanding of these problems.

The IRS is very aggressive in their collection attempts for past due payroll taxes. The penalties assessed on delinquent payroll tax deposits or filings can dramatically increase the total amount owed in a matter of months. We believe that it is critical to have a CPA, Attorney, or Enrolled Agent represent taxpayers in these types of situations. How you answer the first five questions asked by the IRS may determine whether you stay in business or are hamstrung by the IRS. You should avoid meeting with any IRS representatives regarding payroll taxes until you have met with a professional to discuss your options.

The IRS can make your life miserable by filing federal tax liens. Federal Tax Liens are public records that indicate you owe the IRS various taxes. They are filed with the County Clerk in the county from which you or your business operates. Because they are public records, they will show up on your credit report. This often makes it difficult for a taxpayer to obtain any financing on an automobile or a home. Federal Tax Liens can also tie up your personal property and real estate. Once a Federal Tax Lien is filed against your property you cannot sell or transfer the property without a clear title. Often taxpayers find themselves in a catch-22 in which they have property that they would like to borrow against but, because of the Federal Tax Lien, they cannot get a loan.

An IRS levy is the actual action taken by the IRS to collect taxes. For example, the IRS can issue a bank levy to obtain the cash in your savings and checking accounts. Or, the IRS can levy your wages or accounts receivable. The person, company, or institution that is served the levy must comply or face their own IRS problems. The additional paperwork this person, company or institution is faced with to comply with the levy usually causes the taxpayer's relationship to suffer with the person being levied. Levies should be avoided at all costs and are usually the result of poor or no communication with the IRS.

When the IRS levies a bank account, the levy is only for the particular day the levy is received by the bank. The bank is required to remove whatever amount is available in your account that day (up to the amount of the IRS levy) and send it to the IRS in 21 days unless notified otherwise by the IRS. This type of levy does not affect any future deposits made into your bank account unless the IRS issues another Bank Account Levy.

An IRS Wage Levy is different. Wage levies are filed with your employer and remain in effect until the IRS notifies the employer that the wage levy has been released. Most wage levies take so much money from the taxpayer's paycheck that the taxpayer doesn't have enough money to cover living expenses.

The IRS can audit you by mail, in their office, or in your home or office. The location of your audit is a good indication of the severity of the audit. Typically, correspondence audits are for missing documents in your tax return that IRS computers have attempted to find. These usually include W-2's and 1099 income items or interest expense items. This type of audit can be handled through the mail with the correct documentation. The IRS office audit is usually with a Tax Examiner who will request numerous documents and explanations of various deductions. This type of audit may also require you to produce all bank records for a period of time so that the IRS can check for unreported income. The IRS audit scheduled for your home or office should be taken more seriously due to the fact that the IRS Auditor is a Revenue Agent. Revenue Agents receive more training in auditing techniques than a typical Tax Examiner. All IRS audits should be taken seriously because they often lead to audits of other tax years and other tax deductions not originally stated in the audit letter.

The IRS has extension powers when it comes to Seizure of Assets. These powers allow them to seize personal and business assets to pay off outstanding tax liabilities. This occurs when taxpayers have been avoiding the IRS. The IRS attempts to collect amounts owed with a seizure as the ultimate act of their collection efforts.

Taxpayers fail to file required tax returns for many reasons. The taxpayer must be aware that failure to file tax returns may be construed as a criminal act (fraud) by the IRS. This type of criminal act is punishable by one year in jail for each year a tax return was not filed. Needless to say, it's one thing to owe the IRS money but another thing to potentially lose your freedom for failure to file a tax return. The IRS may file "SFR" (Substitute For Return) Tax Returns for you. This is the IRS's version of an unfiled tax return. Because SFR returns are filed in the best interest of the government, the only deductions you'll see are standard deductions and one personal exemption. You will not get credit for deductions to which you may be entitled such as exemptions for spouses, children, interest and taxes on your home, cost of any stock or real estate sales, business expenses, and so on. Regardless of what you may have heard, you have the right to file your original tax return no matter how late it's filed.

The IRS penalizes millions of taxpayers each year. They have so many penalties that it's hard to understand which penalty they are hitting you with.

The most common penalties are Failure to File and Failure to Pay. Both of these penalties can substantially increase the amount you owe the IRS in a very short period of time. To make matters worse, the IRS charges you interest on penalties.

Taxpayers often find out about IRS problems many years after they have occurred. This causes the amount owed to the IRS to be substantially greater due to penalties and interest.

Some IRS penalties can be as high as 75%-100% of the original taxes owed. Often taxpayers can afford to pay the taxes owed but the extra penalties make it impossible to pay off the entire balance.

The original goal of IRS penalties was to punish taxpayers in order to keep them in line. Unfortunately they have turned into additional sources of income for the IRS. The IRS does abate penalties. Therefore, before you pay the IRS any penalty amounts, you may want to consider asking the IRS to abate your penalties.